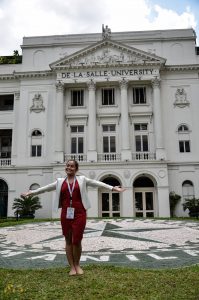 ASEAN Youth Summit 2017 , happened last April 23 to April 27 of this year, was all about the Young Leaders from the different countries under South East Asia that gathered to promote One ASEAN Region.

Given the chance to be chosen as one of the delegate is an opportunity that should not be set aside, that is why I really exerted an extra effort to be able to attend the summit.  Representing my Country in an event like this is such an honour on my part. In the summit, each one of us was given the opportunity to speak for ourselves and for our country.

We  shared our thoughts,  identified the issues and being able to come up with a solution that was agreed by all nation state that will not just benefit the country itself but the whole ASEAN Region.  From the variety of talks in the form of panel discussion, I further understood the whole process of decision-making and the diplomatic procedure in an ASEAN meeting as well as the 3 pillars  of ASEAN.

ASEAN Youth Summit 2017 did not just teach me about the Model ASEAN Meeting, but, it also taught me on how to socialize with Young leaders despite our differences in terms of our culture and traditions.

In the 4 days that we’ve been together, it wasn’t  just a group of young leaders that I found who were  eager to learn new things, but a family whose quest is  to work together to be able help each other in order for them to raise together in socio-cultural, political security and economic track. At the end of the summit I can say that there is strength in diversity.

My journey in the ASEAN Youth Summit 2017 was something worth it, worth it in a way that I won’t get tired of sharing my memorable experiences and inspiring  stories to other aspiring young leaders out there.

Like any other Youth, I didn’t expect this coming but I am indeed thankful because it changed me a lot, from a voiceless individual to a young leader trying to influence other youth to take a step forward to achieve their goals in life as what I am doing right now.

With this, I challenge all Youth to take part in Nation building and learn to voice out their ideas because our voice should be heard. “Wag po nating maliitin ang ating kakayahang impluwensyahan ang ibang kabataan sa mabuting paraan dahil tayo ang pag asa. We are not just the youth, because we are the youth. We are the future” –Vea Mae Guzman/Youth Solidarity for Peace/Peace Advocates Zamboanga Foundation

About the Writer: Vea Mae is a volunteer of Youth Solidarity for Peace under the Peace Advocates Zamboanga Foundation. According to Vea,  the opportunities she received from YSP such as being a facilitator in Youth training and workshops helped her boost her self confidence and developed her skills in all aspects.