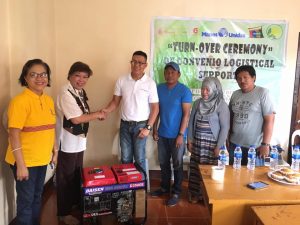 Barangay Bolong proposed an Animal Disperal Project which was supported by ROOF through a Goat and Pig (Swine). A turn-over of the said animals took place at the Barangay Bolong, Barangay Hall last September 2. Present in the ceremony were Hon. Junie Enriques, Barangay Kagawad of Brgy. Bolong, Mr. Erikson Clavano, President of the Multi-Sector group together with other members of the Barangay’s Sector groups.

On September 6, 2 units of Canopy Tents were turned-over to Barangay Divisoria as part of their Disaster Risk Reduction Management project. Hon. Jesus Macrohon and the rest of the Barangay Council members participated in the ceremony, Divisoria Elementary School was also represented by Mrs. Malou Rebollos, Elementary School Principal together with the Children’s and Farmers Sector members.

While Barangay Lapakan, on September 13, received 50 sacks of Rice in support of their Rice Retailing Business for their multi-sector groups composed of Women, Farmers, Children, Youth. This is under the Gender and Development and Sector-Poverty Reduction Logistical Support. Hon. Clodualdo Cosme, Members of the Barangay Council and Mrs. Merlie Cosme, President of the multi-sector group showed their support in the turn-over ceremony.

ROOF capped off their series of Logistical Support turn-over in Barangay Cabaluay. 4 units of Sewing Machines for their livelihood Project to the Women’s sector which is dressmaking, 2 units of spine board, 4 units of neck brace and 2 units of harness were also turn-over for their Disaster Risk Reduction Management Logistical Support proposal. Barangay Captain Makko Apolinario and members of the Barangay Council of cabaluay and the President of La Mujeres de cabaluay, Mrs. veronica Francisco showed their support through their participation.

Department of Labor and Employment supports Proposal-Writeshop of the CSO