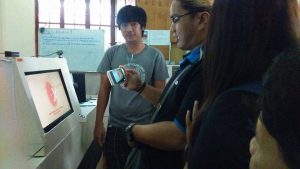 These equipment will be used in implementing projects that would benefit the barangay’s constituents. The DRRM logistical support proposal was identified by the sectors and officials through a series of learning sessions and consultations. Barangay Calarian is a partner barangay of the Katilingban sa Kalambuan in a project on participatory governance. Katilingban is a member of the Zamboanga Basilan Integrated Development Alliance. Other members include Peace Advocates Zamboanga (PAZ), Reach Out to Others Foundation (ROOF) and the Nagdilaab Foundation Inc. (NFI).

After the turn-over, Barangay Chair, El King K. Omaga, explains to KKI, how their barangay data base / management information system works. The system, established in part through a computer unit provided as logistical support by the Peace Advocates Zamboanga (PAZ) in 2014, continues to serve the needs of Calarian residents.