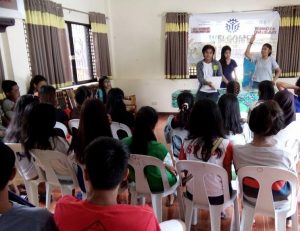 176 children (63 boys, 113 girls) in 7 partner-barangays of Katilingban Sa Kalambuan Org. Inc namely Zone 1, Sinunuc, Talisayan, Sinubong, Patalon, Labuan & Limpapa were gathered in an orientation on the United Nation Convention on the Rights of the Child (UNCRC). The participants familiarized the 4 Principles of UNCRC and  they were able to identify issues and concerns in their respective community. During the workshops, the following were the issues and concerns raised: Child Abuse(Physical & Emotional), Increasing number of Street Children, Child Labor (Working in Factories), Out of School Youth, Teenage Pregnancy, Bullying, Air Pollution, Sexual Harassment, Not Function of BCPC (Barangay Council for the Protection of Children) and unapproachable officials of the Barangay. The Children Led activity started May 13-30,2017 initiated by the Boses Ng Kabataan Officers and Members.