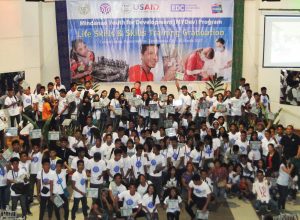 The MYDev-ZABIDA team also took the opportunity to show its recognition of partnership and support to its staff, socio-civic and local government partners through a presentation of certificates. The success of the MYDev Program in Zamboanga City is translated to the smiles and sense of empowerment of its program completers. (Jobel Henesy Foliente/MYDev-ZABIDA)